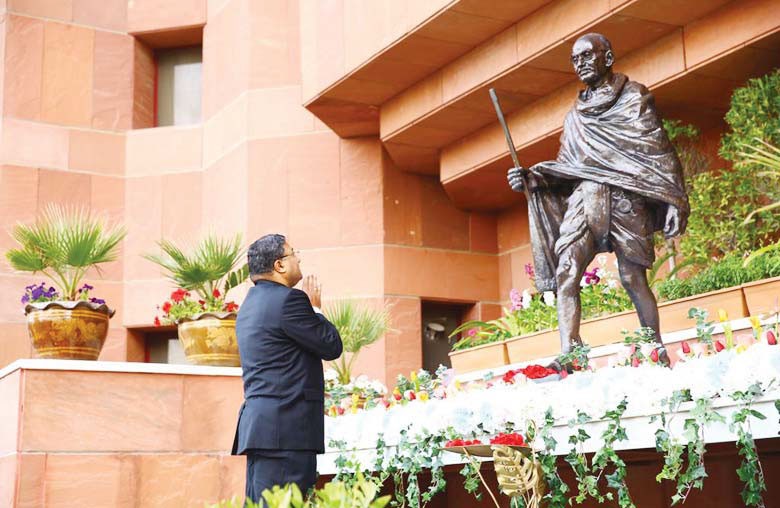 
KUWAIT CITY, 26th January: The Embassy of India in Kuwait celebrated the 73rd Republic Day of India on Wednesday, 26th January 2022. In line with the circumstances of the Covid-19 pandemic, the celebrations were held in accordance with health protocols and safety guidelines issued by the Government of Kuwait. The official program started at 09:00 at the premises of the Embassy. Ambassador HE Sibi George paid floral tributes to the statue of Mahatma Gandhi, followed by the display of the national tricolor and the singing of the Indian national anthem and patriotic songs.

On this occasion, the Ambassador read the Indian President’s address to the nation and also addressed those present at the Embassy premises and those who joined the event on the virtual platform. The Ambassador said that this year’s Republic Day has special significance as it coincides with the 75th anniversary of India’s independence, celebrated as Azadi Ka Amrit Mahotsav. He said for every Indian it is an opportunity to remember and pay homage to the freedom fighters who sacrificed their lives to win freedom for India. Of the Constitution of India, and the Ambassador said that it is not only a fundamental law of the country but also serves as a scripture for the social and economic transformation of India . And today, after seven decades, India not only continues to be a prosperous democratic country, but also the fastest growing major economy in the world.

The Ambassador highlighted the Embassy’s efforts to work with the community in promoting India-Kuwait relations and addressing issues of concern to the community. He thanked the associations and community groups in Kuwait for joining with the Embassy to help the community deal with the challenges posed by the Covid 19 pandemic. Stressing that the fight against the Covid 19 pandemic is far from to be completed, the Ambassador urged the community to work with the Embassy to ensure the welfare of Indians in Kuwait and help them cope with the challenges of the new variant. The Ambassador also thanked all Indian associations and groups in Kuwait for their participation in the various events organized by the Embassy to celebrate the 60th anniversary of the establishment of diplomatic relations between India and Kuwait as well as the 75th anniversary of India’s independence. The whole event was broadcast live on the mission’s social networks.