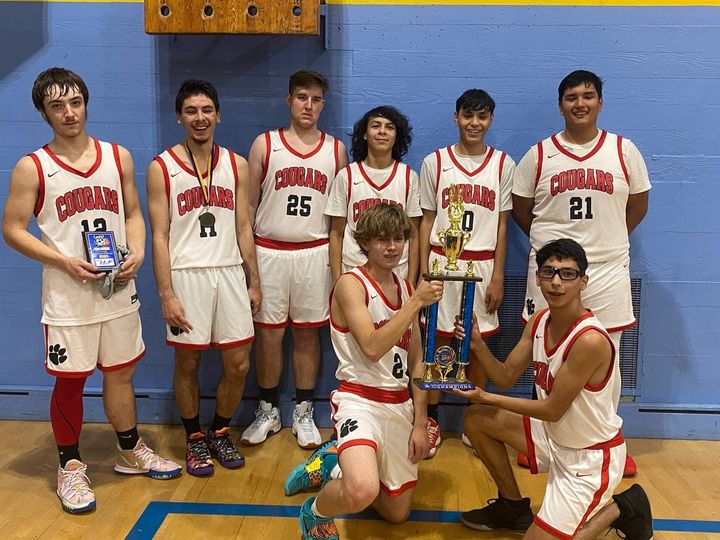 POTTER VALLEY >> Sammy Avalos scored 21 points, one of four Upper Lake players in double digits on Saturday night as the Cougars beat the Mendocino Cardinals 63-50 in the boys’ championship game of the Potter Valley tournament .

Kyle Grandi (11 points) was named tournament MVP and was joined in the All-Tourney squad by teammates Avalos and Kai Young (15 points). Johnny Gonzales added 10 points as Upper Lake tied their season record at 4-4.

Playing their best game of the season to date, the Cougars combined strong defense with balanced offense to push back the Cardinals (5-4), who held a 31-29 halftime lead.

“I was happy for the kids,” said Upper Lake head coach Miles Hayes. “Winning a match builds confidence, winning a championship builds more success. Now we have to maintain this positivity. ”

Upper Lake did not start off very well. In fact, the Cardinals took a 10-0 lead, prompting Hayes to request a 30-second time-out so the Cougars could refocus.

“I told them, ‘Don’t panic, every team is running, playing defense,’” said Hayes.

Upper Lake responded with an 8-0 run as Avalos hit 3 straight runs – the top two of the Cougars’ 10 treys of the night – and Grandi added a layup to make it 10-8.

Playing on the team offense hasn’t been a problem for the Cougars either, who struggled with it at times at the start of the 2021-22 season.

“We looked more consistent than in any game this season,” said Hayes.

Darian Loans Arrow scored his only six points of the game in the fourth quarter, dropping 3 straight points to increase Upper Lake’s lead to 14. The Cougars then froze on the free throw line. One night, after going 13 for 30 from the line in a semifinal victory over Round Valley, Upper Lake went 13 for 19 against the Cardinals.

Hayes said his three captains – Young, Grandi and Blaine Rhodes – made it easy for him to coach as they took charge of the pitch.

“This is what we need,” said Hayes.

Upper Lake has another busy week ahead. The Cougars are on the road Tuesday to face Calistoga in the North Central League II, then open the game Thursday in the Stokes tournament against Elsie Allen of Santa Rosa. The start is given at 1:30 pm at the gymnasium of Kelseyville High.

In the other men’s Saturday tournaments:

Sluggish from the start in Healdsburg, the Middletown Mustangs fell to West Sebastopol County in the consolation championship game of the Redwood Empire Invitational.

“It was quite frustrating,” said Middletown assistant coach Jake Diehl. “We forced shots, we missed a ton of shots.”

All-Tournament Pick Brody Breeden finished with 11 points, the best of the team, for the Mustangs, who host Fort Bragg in the Championship on Tuesday.

The Middletown men’s and women’s junior teams will both play home championship games on Monday against Lower Lake.

At Healdsburg, although icy ground in the first half, especially in the second quarter, the Clear Lake Cardinals fought back in the second half to make it a game before falling to the San Rafael Bulldogs in the game. for seventh place. of the Invitaitonal Redwood Empire.

“We started off slow, but in the second quarter we couldn’t make a basket,” said Clear Lake head coach Mike Damiata. “We are struggling to score. The same thing happened to us throughout the tournament.

Clear Lake regrouped at halftime, reduced San Rafael’s lead and spent most of the fourth quarter at 10-12 points, according to Damiata.

“They could have sent it by post, but they didn’t,” Damiata said of his players.

While it was a tough day for Clear Lake starters outside of Joey Soderquist (12 points), two reserves – Miles Mattina and Greyson Wind – had solid outings.

Mattina scored four points and played solid defense, so much so that he was named to the All-Tournament squad.

Clear Lake (3-4) will travel to Willits on Tuesday for their North Central League I opener.

“We’re never going to be a high scoring team, but we have to do a better job,” Damiata said in preparation for the 16-game league season ahead for his Cardinals, the two-league in defense. champions. “We are going to regroup. ”

Danville: The developer begins the application process for a 158-unit condominium project at the Borel property | News